Bad Vibes by J.D. Faver will give you good vibes. 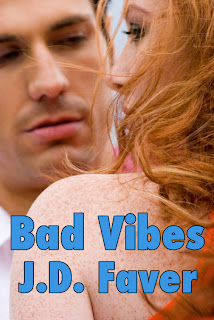 When government agent Mike “The Iceman” Burke invades her South Padre Island turf, Deputy Darla Calhoun is assigned as liaison officer to his team. Her skills as a sniper come in handy when a gang of human traffickers strikes close to home, kidnapping local women including her best friend. Darla is recovering from her husband’s suicide and trying to be a good parent to her twin sons. The ICE assignment takes her out of her misery and plunges her into a dangerous mission and a steamy affair. Mike and Darla tear up and down the Intracoastal Waterway in search of the kidnappers and the captive women while Rafael and Javier conduct their own investigation. Will they rescue the captive women or will the kidnappers slaughter them as they have done in the past? Two teams race to find the answers before it's too late.
Excerpt:

Back on the boat, Darla had fallen silent.
Mike watched her grieve for her missing friend. He’d known in an instant that the two cases had to be related. The likelihood that Salvador Obregon was the common denominator between the two criminal activities was too great to overlook.
Mike had questioned Darla about the run-in her friend had with the Obregons before her disappearance.
He remembered the tall, slender woman from the birthday party. Large, deep blue eyes and a tumble of honey blonde curls had made an indelible impression.
Darla was upset with him. He couldn’t say angry. She had to understand that they were on an assignment and that he received his orders from a higher authority.
She was used to operating as a member of a smaller, less intricate team, where they could fly by the seat of their pants and make split-second decisions. Where one man could give them the go-ahead and they didn’t have to go through a complex chain of command.
Mike gazed at her sadly, a knot in his gut. She doesn’t understand.
She’d heard him say that the helicopters had located a probable boat holding the kidnapped women out in the Gulf, and she’d wanted him to go there immediately in case her friend was on board.
He sighed and went to stand at the railing beside her. Together, they gazed at the sun setting behind the sand dunes.
She glanced up at him and then down at the water.
Mike cleared his throat, wondering if this might be the right time to discuss his feelings as Freddy had suggested. Not even close.
When she spoke, her voice was small and tight. “I’m so worried about Cassie. She’s such an amazing, wonderful person. I just can’t stand that she’s missing and that Salvador Obregon might be involved. I won’t be responsible for myself if something really bad happens to her.”
Mike put his arm around her and stroked his fingers over her hair. He dropped a kiss on her head and heard her sniff. Guess she’s not that mad at me.
He took a deep breath. “Darla, I care about you. I don’t want you to think that this thing between us is something that I take lightly.”
She gave out a little one-syllable laugh.
Not the reaction he’d expected.
“This ‘thing’between us? What does that mean?” Her voice had an edge to it.
Mike drew another deep breath and turned to her. He grazed his fingertips over her cheek. “I’m trying to tell you that I love you.”
She started to say something, but he cut her off with a kiss. He tried to show her how he felt with his kiss. He might not have the right words, but surely she could tell how he felt.
She pulled away, to look up at him. “You love me?”
He quirked a smile at her. “Yep. If you’re just toying with me, you’re going to break my heart.”
“You love me?” She repeated.
“Honey, I love every little atom of you. If you don’t love me, it’s okay, but I had to tell you how I feel.”
She frowned at him. “Well, of course I love you. How could I help myself?”
Mike’s face split into a wide grin. “Really?”
She nodded, her frown turning into a flicker of a smile as she buried her face against his neck. “I don’t want to put any pressure on you, but if you love me, Mister ICE Man, could you please find my friend Cassie?”